OMG, I did, did you? What a taste sensation, there's no going back now.
Posted by Shrimpton and Perfect at 17:19 No comments: 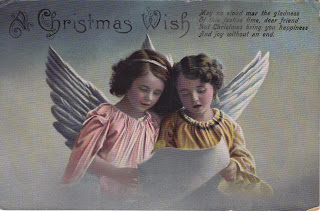 May no cloud mar the gladness of this festive time dear friend,
But Christmas bring you happiness and joy without an end.
Best wishes to all, have a healthy, wealthy and very happy 2012
Posted by Shrimpton and Perfect at 19:40 No comments:

We had the best weather in East Sussex yesterday, not a cloud in the sky and absolutely no wind. The beautiful day coincided with a visit from our boy Jack, who popped down from up t'north to spend an evening with us before Christmas.
We thought it would be a cracking idea to get out and enjoy the day, after all almost all of the Christmas prep is done, we only need to go out today for the BIG food shop.
We are NT members so we took a short drive to Sheffield Park which was looking tres splendid and very wintery, added bonus, not many people there. We made a discovery....................... 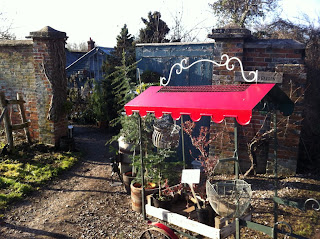 This amazing 'secret' walled garden, within the Sheffield Park grounds. Owned and run by the kitchen garden brewery 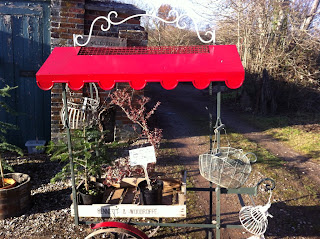 The lovely chap there and his playful puppy Freddie were very friendly, the guy knows everything there is to know about the wine he stocks, they have their own vineyard on site, and his daughter is the micro brewer there.
Lots of plants and really unusual garden ornaments, a total pleasure. 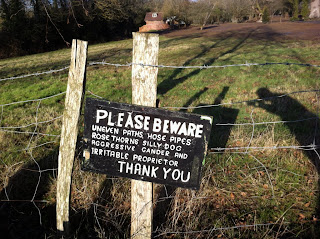 Can you see Mr. S&P taking this pic, he looks like Monsieur Hulot, no? 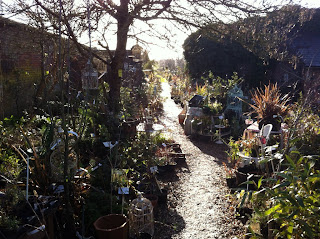 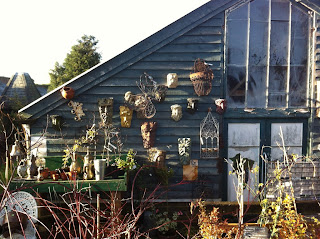 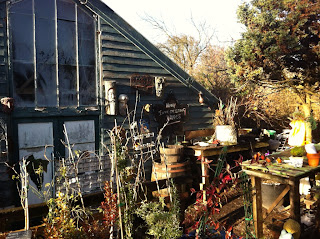 We were dazzled by the choice of wines, but chose a couple, and also bought some Somerset apple brandy, Mr. S&P had to have one of each of the real ales brewed on site. Just the sort of shopping experience I enjoy, supporting local makers and meeting the people who have a passion for what they do.
Posted by Shrimpton and Perfect at 11:00 1 comment:

I'm not sure dear reader if you know but I do strive to buy and sell a little bit of vintage objet trouve. I once had high hopes for my on-line vintage knitting service, but alas for various reasons it just didn't work out. The plus side of that is of course I now get to search the highways and byways for all manner of vintage treasure. (As I used to do many years ago when my son was very small.) 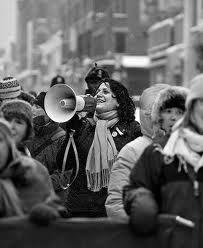 bring out your vintage treasure
It is my hope to buy and sell beautiful vintage and retro inspired items at reasonable prices. I really do want to feel that when someone buys something from me they are very pleased with their find. And of course that they realise they are re purposing a once much loved and useful item.

Like most thrifters I find myself drawn to places where I can hunt out the vintage bargains, boot fairs, charity shops jumbles etc. You do understand I have to check out every possible source? I'm hoping next year to attend some 'proper' auctions to raise my game slightly. 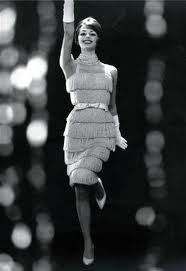 Anyhoo the run up to Christmas has been a busy one and I will need to get a wiggle on in the new year to find some stock. Stock that is, not stock I buy then decide to keep.
Today I found some gorgeous little side plates, late 60's or early 70's, German made, but I need to keep those. 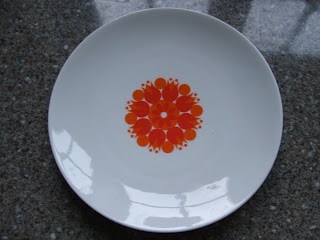 oh, and this wonderful oven to table bowl by Midwinter, it's called Stonehenge (which amuses me.) 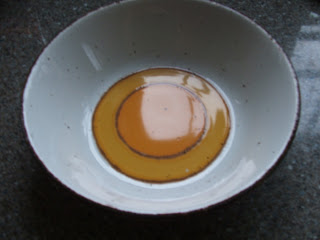 Have to keep that. 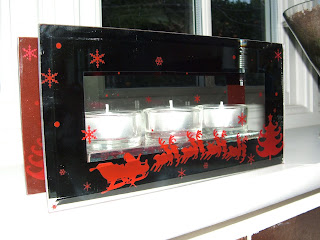 And this little beauty, a mirrored triple tealight holder, but this has reindeers on it, so it's a keeper too. You can see there's a problem developing can't you ?

Black and white images
canberrasgotstyleblogspot
bluevelvetvintage.com
Posted by Shrimpton and Perfect at 16:21 1 comment:

I've given the old hand made a bit of a bash this year, it's always something I mean to do but never quite get around to. Not presents for other people you understand, just cards and a wreath for my door, something for my mother in law's door will be following at the end of the week. I'll try and remember to take a picture of that too.

This is the design for my hand screen printed cards, my inspiration was an old 1950's glass. 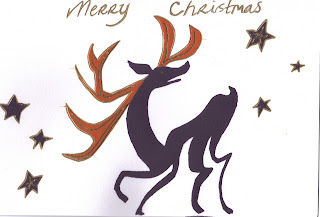 I sent one of these to my son, who's living in Cheshire at the moment, and he called me to say how much he liked it. I had a little chuckle to myself whilst looking at his tree decorations made at nursery, still gracing my tree after 18 years or so. Funny how the roles reverse with your children eh? 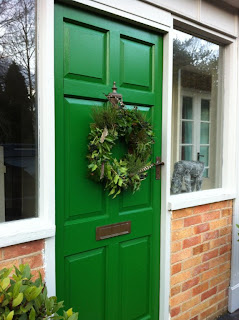 I went to a workshop to learn how to make this wreath. Wonderful learning a new skill because not only can I always make my own in future but possibly make some to sell next year. 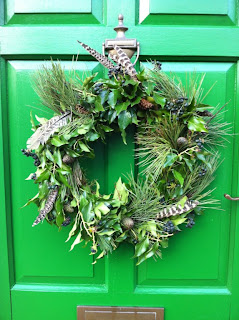 Apart from the florist wire and the copper base everything else was found. Fir cones, ivy with lovely dark berries and my favourite, pheasant feathers. 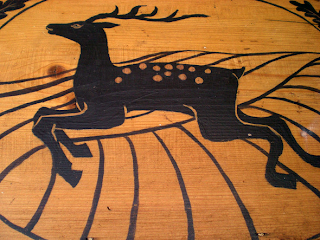 My birthday is just two weeks before Christmas. Not always a good thing. People are busy, restaurants are full of people having Christmas parties, so limited menu, stressed staff. So a little bit of creative thinking has to be employed to make it a celebratory event rather than just a prelude to Christmas.
Mr. S & P came up trumps this year. 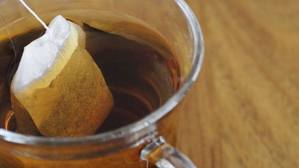 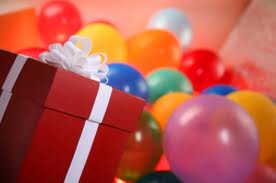 Tea and presents in bed. Followed by Eggs Benedict for breakfast. Up to the big smoke in a train full of the Santa Claus family. 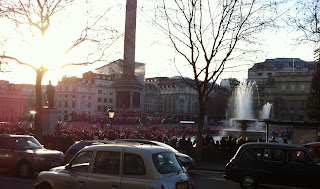 Hundreds of Father and Mother Christmas' in Trafalgar Square making merry and making sure we all know Christmas is coming. 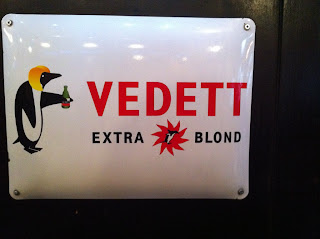 A quick snifter in a rather gorgeous Dutch pub. 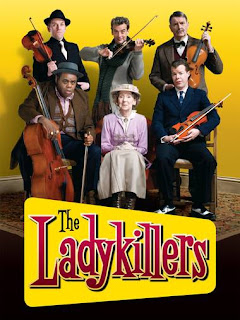 Then oh joy, The Theatre darling. This production of The Ladykillers is tremendous. If you see nothing else go and see this. 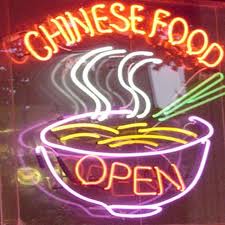 Spot of supper in China Town, then home. What a perfect day. And I've still got Christmas to look forward to. I have been doing a spot of home made this year, which I will share with you very soon.
Posted by Shrimpton and Perfect at 15:46 No comments: 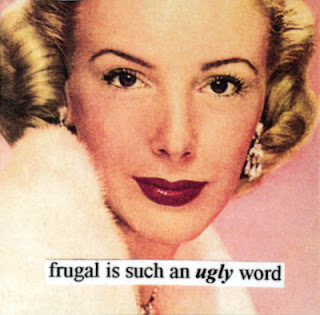 I think just about everyone is watching the pennies, but it strikes me that means different things to different people. Blog world is awash with tons of chat about how best to make our money stretch. As far as I'm concerned it's all good, and even if you're reading stuff you already know, that's fine. Some bloggers seem to lead (to me) an unbearably frugal lifestyle. Looking for the cheapest of everything including food. I do understand that it is a lifestyle choice for them, and even when brought about by necessity, they seem to get a buzz from living in that way, because they have chosen to do it, rather than it being enforced. 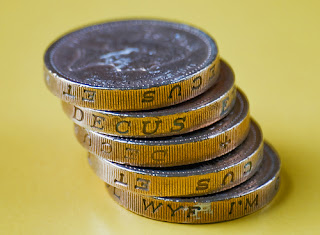 I respect what they do and I'm not going to be critical about any efforts to lead a less consumable lifestyle.
But, yes you knew that was coming, I wouldn't eat and don't eat the flesh of an animal that has been ill treated  or force fed. I'm well aware that good quality meat can be  EXTREMELY expensive. But there are also many cuts of meat and special deals on meat that can make it an affordable option. Eat less meat and I include chicken in that, pad your meals out with veg or pasta or rice, and don't expect to have it with every meal. I was amazed to see a very well intentioned lady on a penny pinching tv programme last week feeding her two boys microwavable burgers. 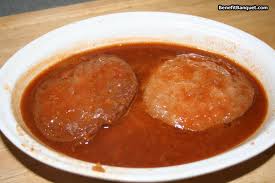 Both boys said that the 'burgers' were disgusting  but because they were cheap she had bought tons of them. Please don't buy and please don't eat this kind of s**t, it's not good on any level. Not good for the animals, not good for the producers of the meat, and truly not good for anyone who eats it.
Be creative, take all the advice out there and make your money go further, try to spend less or what you can comfortably afford, but also live well.
My vote goes to frugality is beautiful.

Posted by Shrimpton and Perfect at 19:48 2 comments: 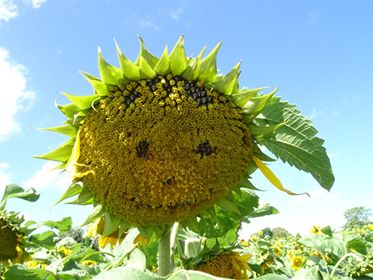 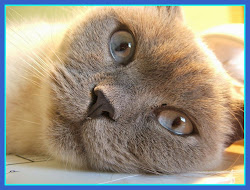 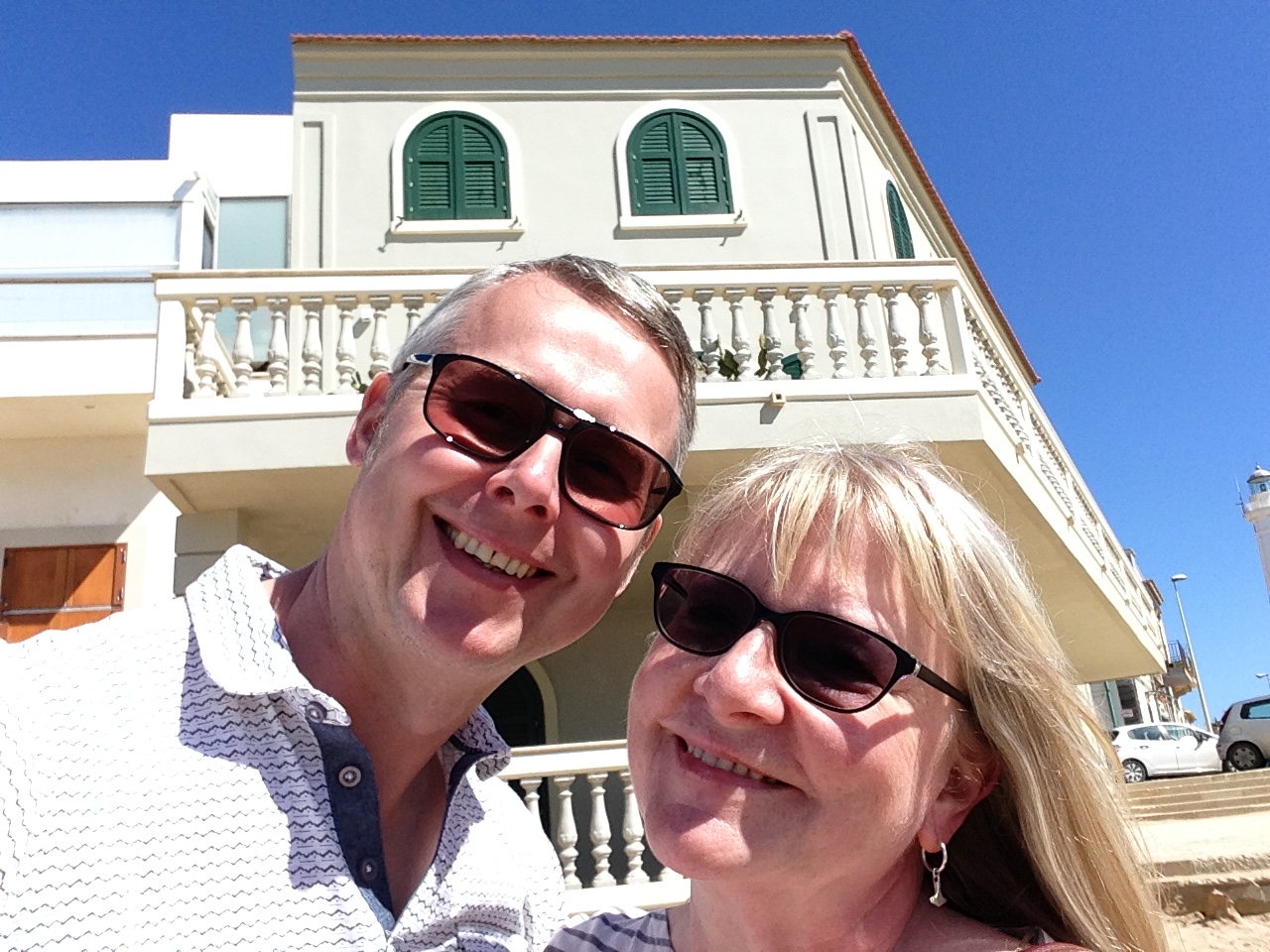 PROF & ME BEING ELVISH 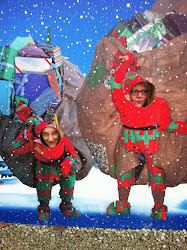 PROF & ME BEING JENNY & TRIXIE 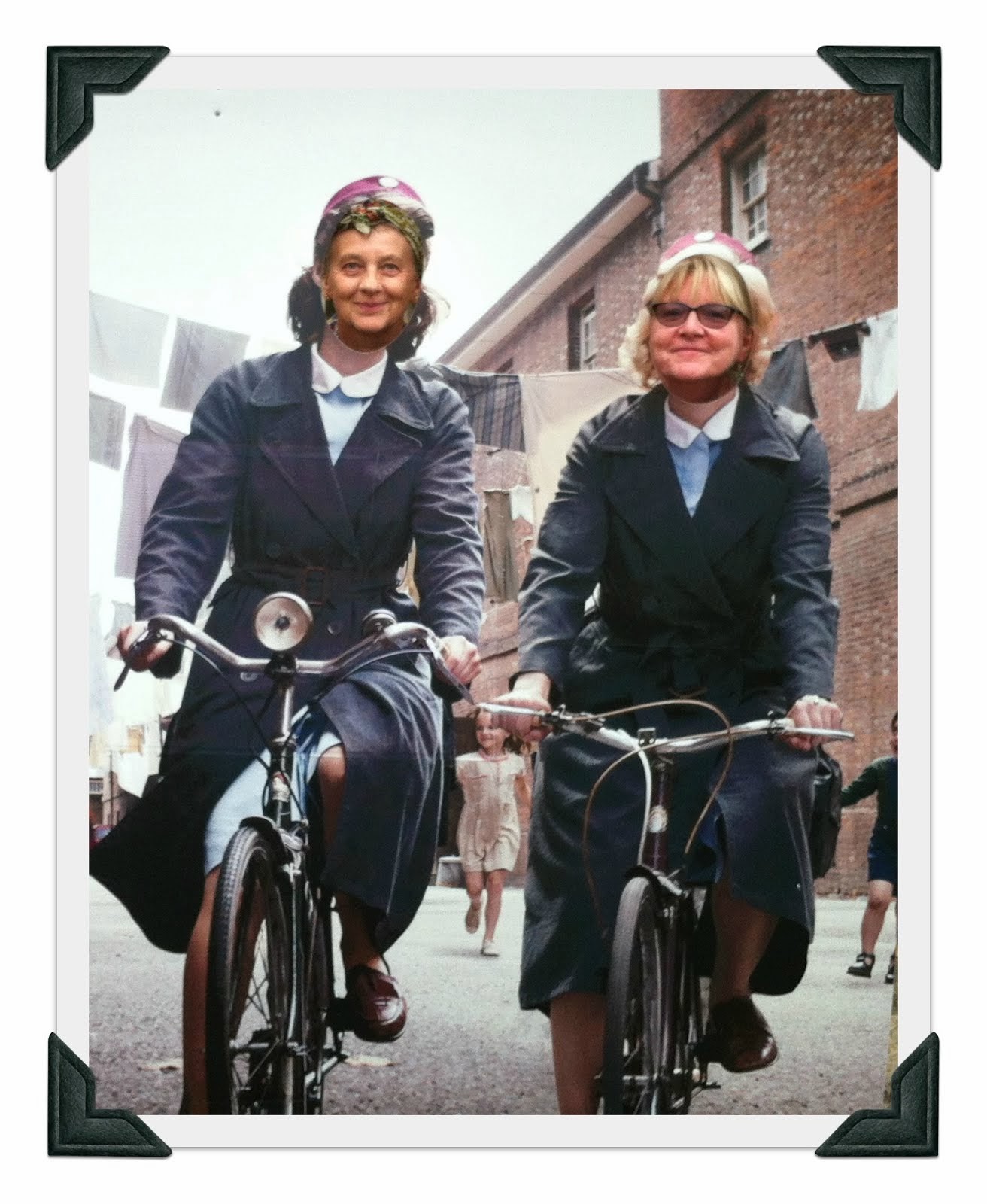